The final few weeks at Diderot and in Paris are before me. I had lots of people ask me over Easter whether I completely hate Paris itself, and I’ve realised perhaps I have been too harsh in my critique so far. In truth, my remaining time is a tantalising countdown to when I can say goodbye to Céline, Kant and Plato (to name just a few Greats I’m not particularly enjoying studying). I have always loved Paris as a city and it has been incredibly interesting to live here beyond the tourist dimension I had previously experienced. I would, in all honesty, consider living here again.  However, I really do not think I would study again in Paris (surtout not Diderot) for love nor money.

It’s safe to say the end is approaching rapidly. I have just 6 final exams ahead, before I become a fourth year student at UOB, back to a reality that I’m witnessing my friends currently endure. An ultimate stage of the flat share has also developed; the latest flatmate doesn’t speak a word of English, so 8 months after moving to Paris I’m discovering huge gaps in my vocabulary; notably, cat litter and twine so far (neither of which are actually hard but they certainly didn’t spring to mind immediately).

I’m pretty confident I will come back to Paris many times in my life, so there is no burning desire to see absolutely everything before I leave. Luckily, some things I have not yet experienced and don’t plan to – I have managed to avoid dreaded trips to the police station and the hospital (touch wood!) so far. In some senses, I haven’t needed to have the same practical conversations that others have struggled with – for instance, calling to rearrange a new lock on their flat after having their keys stolen is a complication that I have been witness to but not a subject of. I’m sure my quest for fluency hasn’t suffered that much without the addition of these tense exchanges.

In terms of bringing my life à Paris to a close, some things will never fail to amuse me. It’s 2017 and yet I still need to send a physical letter to end my phone contract. I recently received a call from my bank advisor, requesting for an urgent call back or a meeting. I rushed in to discover that the “suspicious activity” they were concerned about is that I hadn’t used my card in several months (I’m not sure Monsieur understood why I was living off my English overdraft pre-loan instalment). Why exactly that question needed to be asked in person, taking an hour of of my day, rather than simply asking over the phone “Does your card still work?” it remains to be seen.

Nothing is ever simple here, no matter how often I think I’ve got my head around the systems. Diderot helpfully emailed foreign students the official exam timetables back in December, so we could book the necessary travel home months before. Diderot also changed its exam timetable and failed to notify any of the foreign students, whilst a bizarre progression of hearsay informed the French masses. On the positive side, I will now have a spare few days after exams finish to eat, drink and explore to my heart’s content. However, I certainly won’t miss the archaic administrative system, nor the overwhelming amount of admin staff who seemingly detest their jobs.

In the remaining 35 days my time will be split; attempting to revise for (and avoid all panic for) the looming exams and equally, appreciating Paris whilst I still have my 75010 postcode and metro pass like a true resident. Life certainly is more beautiful in the spring sunshine. The luxury of time affords day trips to areas that might bypass a weekend-break; for example, a picnic in Bois de Boulogne provided the perfect escape from Paris pollution, whereas a Sunday at Versailles was worth the crush of tourists knowing we had no time constraints.

Finally, not only does the Monsieur at my local Boulangerie know and expect me for my slight croissant obsession, the local takeaway now recognises my hungover chip trips. It’s safe to say that following from my previous post, I’m currently representing for binge-drinking Brits. You need to spice up an essay on Hugo somehow. 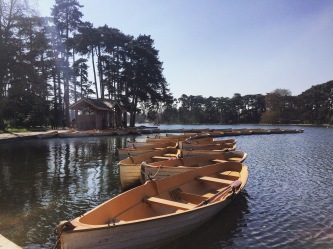 One Reply to “Homestretch”

This site uses Akismet to reduce spam. Learn how your comment data is processed.

Anyone else struggling with mid-week blues? Christmas can’t come soon enough, except no one has any presents yet... instead, I’m dreaming of the weekend and exploring favourite spots by home, including this beautiful flower shop 🌸🌹 . . . . . #ukblogger #lifestyleblogger #flower #flowershop #interiors #decor #hitchin #explore #flowers #youmustsee #pixel4 #pixelphotography #googlepixel4 #bloggersunder5k #bloggersunder1k #florist #freshflowers #hiddengem #midweekmotivation #thegoodfloristguide #independentbusiness #supportingsmallbusinesses #nature
Happy Saturday! It’s suddenly got much colder, every town square is filled with Christmas markets and I’ve accepted 28203 diary invites at work for 2020 meetings... so here’s a #throwback to exploring Central Park in the sunshine! I’m finishing a blog post on my top tips for New York so stay tuned ✨ . . . . . #throwback #weekendvibes #newyork #newyorkcity #newyorktrip #centralpark #centralparkmoments #sunshine #winter #pixel4 #googlepixel4 #beautifuldestination #ukblogger #ukbloggers #travel #travelblogger #autumn #fall #autumnstyle #bluesky #nature #explore
Cosy Sunday 🌸 I always find the transition period between a dreamy holiday and busy reality a bit intense, and so Boyfriend and I are having coffee and cake and steeling ourselves for the first full week back. . . . . . . #sunday #cosysunday #mondayblues #coffee #cake #independentcoffeeshop #cafe #hitchin #weekendvibes #foodporn #freshlybaked #instafood #ukblogger #lifestyleblogger #coffeelover #vintage
Pasta of dreams 😍 we had some good food, bad food, and incredibly delicious food during our New York trip 🐷 back to reality today in windy, wet London and all I’m dreaming of is this pasta! Definitely a top recommendation for anyone visiting ✨ this dish is orecchiette with wild mushrooms, escarole & butternut squash! . . . . . . #newyork #newyorkcity #newyorktrip #weekendbreak #sotto13 #food #foodporn #delicious #italian #restaurantreview #pasta #italianpasta #foodie #foodstagram #travel #travelblogger #foodlove #manhattan #instafood #pastalover
We went for a beautiful sunny stroll along the High Line and I can 10/10 recommend it 👏 such a calm way to see such a busy city! I’d get up early though because it’s a tourist trap, even on a week day... . . . . . #newyork #newyorktrip #newyorkcity #highline #highlinenyc #travel #travelgram #beautifuldestinations #youmustsee #passionpassport #pixel4 #nature #urbanjungle #ukblogger #ukbloggers #travelblogger #bloggerabroad #photooftheday
A crisp stroll in Central Park 🌿 one of my favourite things about London is that we have lovely parks everywhere for a dog walk (I don’t jog). I’m very pleased that Central Park is as beautiful as the movies and New Yorkers are lucky to have this on their doorstep 🌱 . . . . . . . #newyork #newyorktravel #newyorktrip #travel #YouMustVisit #beautifuldestinations #thisisnewyorkcity #centralpark #hike #nature #travel #travelblogger #wanderer #passionpassport #travelgram #mondaymotivation #mondayvibes #park #pixel4
%d bloggers like this: